Award-winning and best-selling artist, Alicia Keys has finally emerged from a four year hiatus with the debut of two brand new singles this past week. And I must say that it was worth the wait! One is called ‘In Common‘ and the other ‘Hallelujah’. Anyone that knows me know how big of an Alicia Keys fan I am, so I was particularly overjoyed when I heard these tracks.

She recently delivered a superb performance of both singles on Saturday Night Live.

Take a peak below:

An accomplished pianist, Alicia Keys’ raw talent shines through in every song. In addition to writing almost all of her own material, she has done numerous covers and has beautifully managed to make each song her own. One example of this is her single “How Come You Don’t Call Me” from her debut album Songs in A Minor. The late, great Prince originated the song and Alicia added her own unique flavour to it.

What I’ve always admired about Alicia Keys is that in the last 15 years or so that she’s been in the limelight, she has never deviated from her true self as an artist. She has always maintained her own unique style and fashion sense, remained dedicated to her music, and never conformed to the masses. How often do you see new up and coming singers who start out with their ‘real’ persona and then as they evolve, end up becoming a part of the cookie-cutter mishmash of performers that exist today? The end result is that they get lost in the bunch and virtually forgotten about.

In this generation, it is very hard to stand out as an artist. Many people that label themselves as one are really just good performers on stage but lack the depth and originality needed to really be an authentic and memorable artist.

Prince, Michael Jackson, Mariah Carey and Whitney Houston are just a few examples of great artists of our time, with Alicia Keys, in my humble opinion, being a welcoming addition to that list.

Her highly-anticipated sixth album is due out sometime this summer and I have my fingers crossed that a tour will be announced soon after. I’ve seen her in concert three times already and she has blown away the crowd each time!

Here’s a pic from her last show in Toronto three years ago: (I wish I had closer seats!) 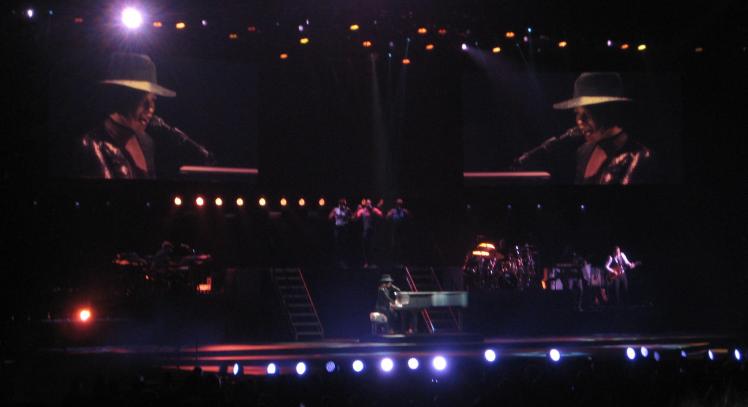 What I also admire about Alicia Keys is that she has reasonable intervals between albums which makes her fans yearning for new material. You’re not prematurely bombarded with new music from all directions to the point where you hardly get a chance to truly savour any of it.

Of course, in her case, I can appreciate that personal commitments and motherhood could slow down the process of making music, but it’s refreshing to hear something new after a healthy amount of time has passed.

Too often we see singers punching out an album a year and inundating us with new material before we are ready for it. Rihanna is an example of this. With the exception of her most recent album, she has virtually released one album almost annually. The end result is just a bunch of rushed, unoriginal, auto-tuned mush with virtually no substance.

When singers do this in their haste to stay ‘current’, they are actually setting themselves back.

To those singers out there, I would suggest taking a page from Ms. Keys: give your fans a chance to miss you. Make them crave for new music, because once you do release new material, the reception will be much more genuine and appreciated.

So if you’re a fan of raw, genuine, feel-good music and your interest in Alicia Keys has only ever gone as far as hearing her songs on the radio, then I suggest you delve a lot deeper and you won’t be disappointed.

I’ve been a fan since the days of ‘Fallin and it’s been a beautiful ride ever since.

Here are just a few of my favourite tracks from Ms. Keys to help you get your journey started:

And of course the list goes on…but you get the drift.

Are you an Alicia Keys fan? What’s your favourite song?

Listen to Sarah on Spotify